This month’s Shadow Warriors literally have Warriors in their name. The Wilson Academy Warriors boys’ basketball team and the cheer squad. 16 young men and 15 young women who chose not the path of least resistance. They stood on principle despite pressure to succumb. These experiences of their youth will help define them for a lifetime. Under pressure, their character was revealed. Self-sacrifice, perseverance, strength, and honor. The character of many others was revealed as well. Some acquitted themselves well, others not so much.

Wilson Academy is a small accredited private school in Lithonia, Georgia just outside Atlanta. While this story centers around a sports team. It’s important to note that the focus of the school is centered around academics. The Headmaster, Byron Wilson played college basketball at North Carolina A&T and Ohio State but never emphasized athletics over academics. The school with 70 students grades six through twelve, sponsors sports teams in basketball, cross country, track, and tennis. The focus isn’t on winning but development and challenge. Most of the athletes aren’t harboring dreams of a career in athletics but are focused on the next academic level. At a recent Black College Expo in Atlanta; one basketball player was offered immediate acceptance at 9 different institutions. Their students including the athletes participate in robotics competitions. In April, many will be taking a school trip to South Africa. Their athletes and cheerleaders participate in sports… they are not defined by them. 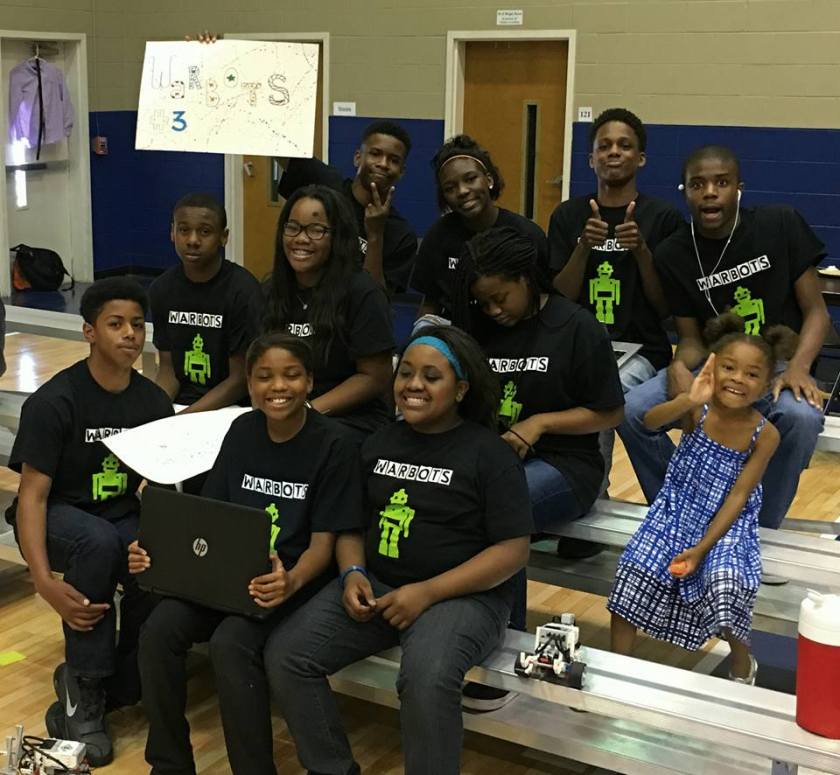 Their saga started during Cross Country Season in the fall. The team members decided to take a knee during the playing of the National Anthem. Many have tried to define this protest on their terms. Making it about disrespecting veterans and the military. The Wilson Academy students respect the military greatly. Many have family members who have served or still serve. The protest which began organically with a single student was about police shootings, inequity and the constant of never any justice. During the season, several veterans they encountered expressed that not only do they not feel disrespected. They were grateful that because of their actions, we live in a society where injustice can be protested.

At the initial event where the kneeling began. The Headmaster/Coach first became aware when an adult was harassing the student. He intervened on behalf of the team member. No adult has a right to verbally abuse and threaten a child. When Cross Country season ended, basketball season began. The same student was a member of the basketball team where he invited the rest of the team to join him. They did. The cheerleaders also. In a school of 70 students, everyone knows each other and bonds were strong.

The protest didn’t go on without controversy. Many family members were highly supportive. Others objected strenuously. It likely took more courage to face a father, mother, cousin or sibling than a crowd of strangers. Every member of the team continued throughout the season in their silent protest, silent at least on the part of the Wilson Academy Warriors.

Wilson Academy was in their third year as a member of the Georgia Independent Christian Athletic Association (GICAA). Most of the member schools were Christian schools, many were Military Prep Schools. Wilson Academy has students of many faiths including Muslim students. In the Division Wilson Academy played in, there were but two predominantly black institutions. The Association includes schools from all over Georgia and a few in nearby Alabama. When games were played outside the Atlanta area it was often like a different world. For the most part, the fellow competitors weren’t a problem. They just wanted to play ball. Other students, parents and adult fans were sometimes hostile. The basketball team and cheerleaders heard the things they were called. Disrespectful… despicable… niggers. Wilson Academy handled the situation with composure and grace. They never yelled back, never fought. Perhaps a little satisfaction came from winning almost all their games. Apparently, some school administrators felt especially offended. When the opportunity came for retribution, it was taken.

After the season ended, playoff games were scheduled as part of the State Championships. Wilson Academy was the #2 Seed in their Region and scheduled to play their first game at Westwood Christian Academy. Westwood informed the GICAA that they would deny Wilson Academy the right to play on their court, causing them to forfeit unless they were willing to stand for the National Anthem. The Warriors volunteered they would stay in their locker room during the Anthem to avoid controversy. That wasn’t sufficient for Westwood. They needed more. They required submission!

The Association informed the team after their last regular season game. They followed up with an E-mail indicating they had changed the manual to prohibit public protests at GICAA events as they were creating a “divisive atmosphere.” The President, Todd Hannon went on to say that Wilson was an “At Will” member of the GICAA and “has the right to leave if they feel they cannot comply with the new stipulations put into the manual. The Headmaster discussed the matter with the team who were unanimous in their decision that they would not stand for the National Anthem. If nothing changed, their season would simply be over.

Something changed. With two days left before the scheduled Playoff game. The Wilson Academy family sprang into action. The word was spread. People called and sent E-mails to the Association President. The Headmaster sent E-mails to Westwood Christian Academy but got no response. He reflected that in their last game there, they prayed together in the locker room. Apparently, the Christian love had subsided. He placed calls to the Association President, they weren’t returned. Todd Hannon responded to one E-mail from a family member indicating he was “traveling” and would “talk to concerned parties on Monday.” Two days after the scheduled playoff game.

The pressure continued, more calls, additional E-mails. Sponsors of the Association were made aware of the situation with the suggestion they monitor it. On the Friday morning of the game, Todd Hannon called Headmaster Wilson and they reached an agreement which would allow the Warriors to participate in the playoffs. Perhaps not a perfect solution, they did not play at Westwood Christian Academy but they will play.

One parent in their letter to the Association wrote, “The one thing that the Warriors have always understood-the greater the trial, the greater the blessing. They will go through the challenge because on the other side of the racism, hatred and discord there will be a reward.”

Carter Wilson is the 15th cheerleader. She isn’t a student at Wilson Academy but has spent much of her life in its classrooms and hallways. She’s now in Kindergarten at another school but has always accompanied one parent or another to Wilson where her father is the Headmaster and both work. She can often be found photobombing pictures of Wilson Academy activities. She learned all the cheers and was finally was given a uniform and officially made part of the team. Carter took a knee along with the other cheerleaders at the games. She also received the abuse. One could ask, how soon is too soon to be exposed to racism and taunts? When do you tell your children, there is no Santa Claus?

Carter, like all the Warriors, has gained more than she lost from this experience. Yes, she discovered that people are not perfect and they will go to great lengths to keep from having to address uncomfortable truths. The lesson that will stay with them all is that sometimes you do win! Stay true to your values, know your rights, surround yourself with a strong community, don’t give up. When next they face a situation that seems unfair and beyond their control. They’ll handle it because they’ve been there before.

The Wilson Academy Warriors are aptly named. Despite their youth, maybe because of it, they stood their ground and stayed true to themselves and their beliefs. They are recognized as “Shadow Warriors” for their contribution to the struggle and the example they have provided to us all.

Each month Enigma In Black will feature a new Shadow Warrior. Don’t miss a single one by scrolling down and clicking “Follow”. Please share so that we can bring these Warriors and their work out of the shadows! Would love to hear your suggestions for future Warriors which you can leave in the comments section.