Millie Jackson is an R&B songstress perhaps best known for her monologues and raunchy lyrics. Her height of popularity was during a long run from the 1970’s thru 1990’s where she did quite well with the possible exception of her Country album. She did on occasion come out with a sweet love ballad, one of which was “Sweet Music Man” which she performed as a duet with Kenny Rogers who originally wrote and performed the song. One of the lyrics was, “You surround yourself, with people who demand, so little of you!” I am reminded of that line often when thinking of Donald Trump.

Donald has always operated in a vacuum where he only needed to work with a few people, all of which under his direct control. Despite his need for adulation he doesn’t really like people and would rather be adored in the media or cheered from a stage than actually holding conversations and shaking hands. The self-professed germaphobe doesn’t like people much at all despite his overwhelming need to be liked.

When Trump had to form a government, he basically had to outsource it to a few new friends around him with some government experience. He appointed Chris Christie to head up his transition team who he had to dump when Bridgegate problems became a drag. He then appointed Pence to head the transition who had staffed a Governor’s and Congressional office but perhaps was over his head given the apparent lack of vetting of Cabinet officials and Mike Flynn who headed up (briefly) the NSA.

Besides Pence, suggestions whirled around Trump coming from Bannon, Flynn, Sessions, Priebus, Gingrich, Giuliani, and others who had, “said nice things” about Trump which he associated with credibility. He found himself increasingly surrounded with people more loyal to those that got them their jobs than Trump himself. He tried to overcompensate by refusing to let Tillerson, McMasters and others appoint their own staffs. Surrounding them with spies who would report back to Donald.He gave offices and more power to Jared and Ivanka, hoping “blood’s thicker than the mud.”

And then there’s Russia. There’s no doubt Russia worked to influence the Presidential Election in favor of Trump. The number of relationships the Trump Campaign and Administration have with Russian oligarch’s, politicians and spies defies any possibility of coincidence. The only question that remains is how much did they collude with Russia and who was involved? Manafort is gone but many of the staff he brought on remain. Bannon has been coordinating most everything in Trump world, how could he not be involved? Flynn had visible conflicts given his paid roles for Russia and Turkey. Some while involved with the Trump campaign. Jared has had questionable contacts. All of these were either not disclosed or lied about. Trump himself has acted as the Putin’s Special Ambassador, praising him at every turn, condemning him for nothing.

Now that the investigations have begun. The one word that must have Trump shivering in his gold-plated boots is being uttered… immunity. He must know these people have no personal loyalty to him, just as he would have none for them in a situation where one of them had to go. Flynn has offered testimony to the FBI and the Intelligence Committee’s if given immunity. Immunity is typically offered when you have evidence against someone higher up that they want more than you. On the Trump organizational chart there is only one man above Flynn. Trump himself.

How does it end? A man like Trump will not fall from grace willingly or easily. He’ll tweet up a storm, encouraging his most ardent followers to revolt. He’ll accuse every party involved of malfeasance, conspiracy, and treason. He has publicly stated the President “cannot have a conflict of interest.” It’s a small step to presume he’s also above the law. He’ll look to those he would wish would help, Congressional Republicans, White House Staff, the people he appointed. He’ll only see those planning their own escape from the Hell Thump hath wrought. They won’t mind selling him out for some immunity of their own. 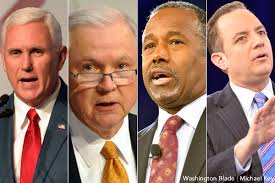 Back to the Millie Jackson lyric. Donald Trump has surrounded himself with people who demand very little of him. They never required him to grow up. They allowed him to continue his irresponsible tweets. They Trumpsplained his every thought and action, treating them as brilliant negotiation strategies instead of the rash, childlike responses of a bully. Because they allowed him to throw his tantrums without reprimand. He in turn demanded little of them. We have a President who is knowledgeable about no policy and has the attention span of a flea. No one will throw themselves on their sword to protect him. Even Ben Carson will declare, “No mas” and give up. He offers nothing of value worth protecting. From now on it’s every man/woman for themselves. And it couldn’t happen to a more deserving person.

5 thoughts on “Donald Trump: “You Surround Yourself With People Who Demand So Little Of You””