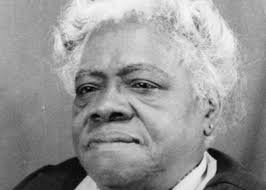 Fortunately, Mary McLeod Bethune didn’t live to see what the school she founded, Bethune Cookman University, did today. It was announced that Education Secretary Betsy DeVos would be this year’s commencement speaker. This immediately lit up Twitter, sparked an online petition to prevent her from speaking and generated hundreds of calls to the University.

Betsy DeVos had already made news regarding HBCUs by suggesting they were, “real pioneers when it comes to school choice.” As if there were options for black students to attend college at white institutions at the time. As Education Secretary, DeVos has already threatened to dismantle an income based repayment program for student loans which is important to many BCU students.

In the press release issued by the school, they said, “ “Much like Dr. Bethune, Founder of Bethune-Cookman University, Secretary DeVos deems the importance of opportunity and hope for students to receive an exceptional education experience. Her mission to empower parents and students resonates with the history and legacy of Dr. Bethune.”

They went on to describe the commitment of Betsy DeVos to education and highlighted several financial contributions to minority causes in the nearby Orlando area where her family owns the Orlando Magic. Many of the family members were involved with the Orlando Magic Youth Foundation which was the vehicle through which the team made most of their donations. I served as a member of the Youth Foundation Advisory Board during their early years and never saw Betsy at any meetings. I did meet her at a charity golf tournament sponsored by the Foundation and played with her in my foursome. She was nice.

Bethune-Cookman is headed down the road already traveled by Darrell Scott and 100 Black Pastors, Talladega College and their Marching Band, Steve Harvey, Jim Brown and Mike Tyson. After their treks and obligatory photo ops with Donald Trump. They all smiled, and the Trump machine rolled on. Trump has unleashed Jeff Sessions on the inner-cities. Commissioned Congress and Secretary Price to dismantle The Affordable Care Act . DeVos was chosen to champion Charter Schools and ultimately promote an inequality in schools seen in that nostalgic time when America was Great in Trump’s mind.

The University’s statement made note of the importance of Federal funds to the school. The current President of Bethune-Cookman, Edison Jackson, made the trip to the White House along with several other HBCUs to meet Donald Trump. Apparently not satisfied with personal genuflection. He’s now subjecting BCU graduates, parents and alumni to a forced audience with the person whose purpose includes lessening their impact.  Mary McLeod Bethune was a strong woman. Submission is not the path she’d have chosen. Don’t weep Mary.