The list of who’s not leaking in this White House would be a lot shorter. Ben Carson… that’s it. He’s the only one not leaking because he last had a clue when he was wearing a surgical mask. Everybody else is leaking and their motivations are varied. A few are trying to expose hypocrisy and lies. Others are diverting attention from themselves and their own complicity. Some are trying to create chaos in their attempt to start a new world order. Here’s the guide to the major leakers and what’s driving them. 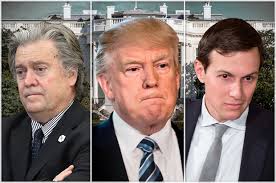 The one innocent man Ben Carson, will walk away singing a Quaker hymn he never learned in the inner city. The truth of the lyrics will escape him while their accuracy is profound. “Tis the gift to be simple… Tis the gift to be free.”