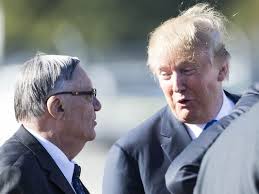 Patriot, the word you described in your pardon of Sheriff Joe Arpaio, doesn’t mean what you apparently thought it did. The word you meant to use was racist. Let me show you:

Patriot: a person who vigorously supports their country and is prepared to defend it against enemies or detractors.

Racist: a person who shows or feels discrimination or prejudice against people of other races, or who believes that a particular race is superior to another.

Maybe you got confused because “Sheriff Joe,” vigorously attacked people of other races. A mistake  only you could make.

When Joe defied the courts, he placed himself above the law. His engaging in racial profiling was illegal and racist and he kept on doing it. With your pardon and support, you’ve forever linked yourself with a racist. You’ve done that all your life.

Hopefully, this will help you to use the correct word next time. No need to thank me. I’m here to serve.

3 thoughts on “Trump Word(s) For The Day: Patriot/Racist”