I’ve met Betsy DeVos. It would be more than a stretch to say I know her. I would be fairly surprised if she remembered me but as I was unaccustomed to mingling with the very rich she stood out in my mind. When the DeVos family bought the Orlando Magic they introduced themselves to the community. For a number of reasons including that the land the then Orlando Arena and surrounding parking areas was built on; displaced a hefty section of the poor black area near downtown selected for the Arena. The Orlando Magic formed the Orlando Magic Minority Advisory Committee and I was its first Chairman.

None of this has anything to do with Betsy DeVos in particular but it was in that capacity that I attended occasional meetings with her husband Dick and played in a charity golf tournament for the Orlando Magic Foundation with Betsy DeVos in my foursome. I have nothing bad to say at all about Betsy DeVos personally. She was hospitable, quite comfortable in the setting and very personable. She was a better golfer than me but I’m not so petty as to hold that against her… much. In my defense I took up golf late in life and I’ll presume she’d been playing most of her life.

There’s a number of things I could see Betsy DeVos doing well. I waited to form an opinion of her being the Secretary of Education until watching the confirmation hearings on television. I don’t doubt her interest in Education which she’s tried to influence in Michigan and elsewhere for years. She and her close family have spent an estimated $200,000,000 primarily in political donations to influence education policy including attempts to funnel public funds to Christian schools. She thinks education is highly important and has put her money where her mouth is. She just doesn’t know very much about how it operates, especially in the area of Public Schools.

She’s never attended Public Schools, her children never attended Public Schools. She never taught or served as an administrator in a Public School and is apparently unaware as to what the major policy considerations are in that area. She’s never run anything like the Agency she’s slated to take over and in fact her stated views are make her more likely to privatize Public Schools and turn most all into Charter Schools with far less oversight as she has in Michigan where she’s basically bought the legislature while transforming 80% of the state’s schools into Charters. 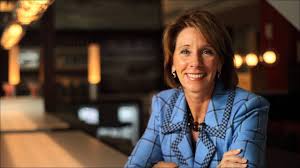 She has many conflicts of interest including ownership in a company that manages public for-profit Charter Schools and a student debt collection agency. To her credit, unlike Donald Trump, she had promised to divest herself from all potential conflicts. As she has yet to turn in all the required financial information requested. Senators are apparently expected to approve her and get the information later.

I know I’m not qualified to run the Department of Education. Yet my experience in Public Schools far exceeds hers as I’ve attended Public Schools, sent my children to public schools and even spoken a few times in classes and presentations at public schools. I even knew the difference between “growth and proficiency” which the proposed Secretary of Education head did not. If I were somehow nominated for that role I would expect someone to note the ways I’m not qualified in the ways Republican Senator’s somehow cannot see about Betsy DeVos. There will be winners in this process which appear to be Donald Trump and Republican Senators. The losers will undoubtedly be the nation’s children.