Forgotten amidst the omnipresence of Stormy Daniels and her attorney Michael Avenatti is the defamation suit brought by Summer Zervos, a former “Apprentice” contestant. Miss Zervos accused Trump of “inappropriate sexual contact,” saying he “ambushed” her,  “tried to kiss her repeatedly” and “touched her breast.” Trump responded by saying Zervos and “all the other women” lied, accusing her of making up the incidents to help Hillary Clinton. Zervos lawyer, Mariann Meier Wang argued in court,  “Trump cannot be allowed to attack a woman who has factually described his sexual groping and be allowed to get off scot-free.”

Trump has fought the lawsuit, seeking its dismissal, yet The First Department of the New York Supreme Court’s Appellate Division just refused to stay the lawsuit and is allowing Summer Zervos to proceed with pre-trial discovery. New York Supreme Court Justice said, “No one is above the law, It is settled that the president of the United States has no immunity and is ‘subject to the laws’ for purely private acts.” That ruling relied heavily on a 1977 Supreme Court ruling indicating Bill Clinton, a sitting President, could be sued in Federal Court.

Zervos has requested records regarding accusations that Trump  “subjected any woman to unwanted sexual touching and/or sexually inappropriate behavior.”  She is also requesting tapes known to exist from The Apprentice where Trump says demeaning things about women, is seen engaging in inappropriate behavior and alleged to have used the “N” word as well. Forget the Access Hollywood tape where Trump describes what he does. We may yet see Trump actually engaging in sexual assault and harassing women.

Given the Mueller investigation, raid of his lawyer’s home, office, and hotel, and possibility of both his son and son-in-law facing indictment. Perhaps “Discovery” isn’t high on his list of priorities. If he has any concerns remaining about his image? It should be!

It has become fashionable to think of the Donald Trump campaign as a reality show. On in which Donald is plotting how to win a ratings battle, which will result in him winning the prize at the end of the show in November. He won among 17 contestants by being louder, nastier, and simply bullying all the others off the show. His strategy was to tag his opponents with labels that stuck to them; “Low Energy Jeb”, “Little Marco”, “Lyin’ Ted Cruz.” Because his attacks sucked up all the oxygen in the room. None of the other contestants had a chance to breathe and none ever got a chance to get out of the gate. The judges in this case ,were a rabid Republican base who backed their contestant early on which in a large field, even without a majority was enough. 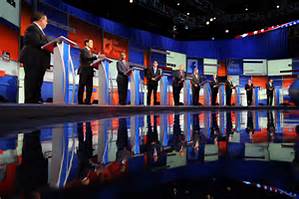 Having won the Republican nomination, the game, and the rules have changed and Donald is doing the thing he has always done. When I say always I mean his whole life because ironically, the game he’s played has always been rigged. He went to military school yet maneuvered his way out of military service by getting five deferments. Son of a rich man, he attended an Ivy League school and later Wharton (I’m told both school’s are ashamed) and began in the family real estate business of real-estate. He decided to make a mark of his own taking on Manhattan with the blessings and funding from his father. Not long afterwards they found themselves pursued by the Justice Department for discrimination against Black rental applicants and despite, his rhetoric, settled with them for over a million dollars. Not the first or last time Donald or his father’s money bought himself out of a situation that might have derailed others.

During the campaign, the battle to develop a working strategy is coming apart because the candidate always falls back on rabid attacks which have extended to Hispanics, Blacks, LBGTQ, the Disabled, Prisoners of War, Women, Educated People and pretty much everyone except uneducated White Men. Because demographics dictate that strategy will ultimately fail. The new game of Survivor is being played out within his own campaign staff as the players are looking to survive with their own brand intact while watching Donald sink his own. Dragging them along by forcing them to support racist, xenophobic and misogynist positions.

Paul Manafort the current chief of staff, (the old one was kicked off the island) is trying to maintain his brand as THE advisor to foreign dictators. Having once served Ferdinand Marcos until he was disposed of and the pro-Russia President of Ukraine while he was looting his country for millions on his way out. He has demonstrated his value by getting the Republican Party to loosen their support for Ukraine and propose ways to weaken NATO. Yes, he was uncovered to receive $12.7 million in cash payments. His response was that he “never received any cash.” Perhaps he made them get a money order.

Ivanka Trump saw her brand rise by doing an excellent job of reading at the Republican National Convention although there was that questionable pat on the ass from her father before heading to the microphone. She told a story of a Donald Trump that was highly supportive of women, highly loyal (except to his wives), charitable giver (undocumented) and great businessman (sued more for failure to pay his bills than pretty much anyone in history). She was staying above the fray in the campaign but now the reports of her own business failing to provide maternity pay for women was a hit. She was strategically silent when Donald was attacking Gold-Star Parents while forgetting how his cowardice in avoiding service.

Katrina Pierson has come a long way from her meager upbringing. She turned herself around after a conviction for shoplifting at twenty from JC Penney’s. She say’s it motivated her and turns it into a redemption story for which I find no fault. She ran for Congress and failed but latched onto first Ted Cruz and the Tea Party and now worked her way “up” to being the spokesperson for Donald Trump. Her strategy appears to be going all in and telling the most outrageous lies hoping nobody will notice. If she were a better liar she might have walked away from that shoplifting charge?

The rest of the Trump kids. Republican’s have tried to prove Trump’s character because of his wonderful kids is nonsensical once you take a close look as them. Donald, JT’s tweets are as vile as his father and Eric is no better. In their defense, they were born into that situation and their allowance (figuratively and literally) depends on staying in their good graces. Except for young Baron who I exclude from this conversation. They’ve seen what happened to their mothers.

As long as the campaign continues to deteriorate it will be fun to watch as the real infighting intensifies and they begin to protect themselves instead of adopting the Trump line, however crazy.