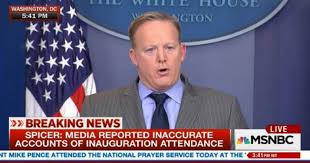 The national media is shocked, shocked that Donald Trump sent his Press Secretary Sean Spicer out to lie about the pettiest thing. The size of the crowd at the Inauguration. People are calling for Spicer’s resignation, pounding on tables demanding that he tell only the truth from the White House Podium.

No offense but the media has been cultivating lies to build ratings for at least the past eight years. You have given a forum to candidates and surrogates who you know have lied and will continue to lie and now you complain. For every matter of truth you bring out, you’ve rushed to provide the “Alternate Facts” and take no stand as to which if either is correct. You have allowed the news to become a game, a formula, designed to attract viewers with no regard for the truth. There are people on both sides wandering around in bubbles of false information. This is something you not only perpetuated, you created.

Even in your attempts to corner the most recent prevaricators, you cannot bring yourself to say “You Lie!” The closest I’ve heard yet is, “he uttered falsehoods.” If you want honesty in Government, in elected officials and candidates. It starts with you requiring it. Stop bringing on guests with a history of lying to fill out your programming. Stop giving credence to liars when you have the power to put it to a halt. It’s not enough to characterize people after the fact as being “untruthful.” Call them out as a liar and cut off their microphone.

Stop letting guests “pivot” and run roughshod over the interviewer. Never answering the question asked and only talking about what they want to talk about. It’s not enough to “get” an important figure into your studio. It only matters if an interview provides information, or clarity, or heaven forbid… news.

We the people deserve better information than you are showing a desire to provide. You promote your on-air personalities, the amount of “breaking news.” You give us informed opinions 24-7. I’d settle for the truth.

Your scolding of the Trump administration is well deserved by them. They are actually lying. In one sense Sean Spicer, Kellyanne Conway and even Trump himself are just doing what they’ve always done, they lie. Just like you’ve always put up with in the past. The outrage you now proclaim rings hollow coming from you. Do better!