From the White House podium, Sarah Huckabee Sanders has officially pronounced that “Pocahontas” is not a racial slur and in fact, Elizabeth Warren is the real racist, not Donald Trump who called her Pocahontas for the umpteenth time. 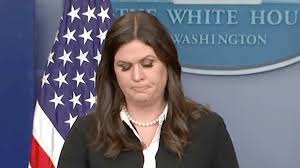 Trump has a history of racist comments against many groups; including calling Mexicans “criminals and rapists,” claiming to have a “great relationship with the blacks,” and saying separately that neither Mexican or Muslim judges could be fair to him. He also demeans and assaults women, but I digress.

To assist the press in their reporting so as to no longer continue to bombard her with questions about Trump’s racist comments and tweets. Sarah Huckabee Sanders has compiled a complete list of all the racist slurs recognized by Donald Trump and therefore by the White House.

She went on to add that, “these terms are utterly offensive and have no place in American discourse. Simultaneously, Trump was issuing an executive order requiring the deportation of anyone using those terms to the country of their family’s origin. In the event, there is no known country of origin or the offensive party is a Native American and “been here longer than any of us.” The default will be to send them to Guantanamo Bay, Cuba where Trump has just reached a deal to create, “Trump Tower Gitmo.”

Sanders concluded her statement by saying all other terms are non-offensive and “if the President uses them, they can’t be racist.” It was reported that Steve Bannon was in the wings cheering and Kellyanne Conway was heading for the nearest microphone to further  elaborate.